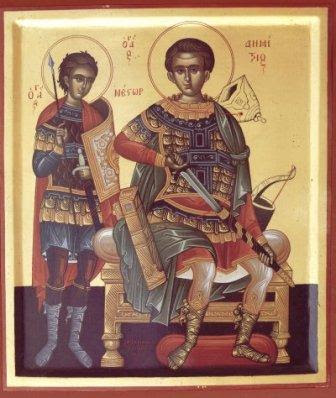 Saint Demetrios was a Thessalonian, a most pious son of pious and noble parents, and a teacher of the Faith of Christ. When Maximian first came to Thessalonica in 290, he raised the Saint to the rank of Duke of Thessaly. But when it was discovered that the Saint was a Christian, he was arrested and kept bound in a bath-house. While the games were under way in the city, Maximian was a spectator there. A certain friend of his, a barbarian who was a notable wrestler, Lyaeus by name, waxing haughty because of the height and strength of his body, boasted in the stadium and challenged the citizens to a contest with him. All that fought with him were defeated. Seeing this, a certain youth named Nestor, aquaintance of Demetrios', came to the Saint in the bath-house and asked his blessing to fight Lyaeus single-handed. Receiving this blessing and sealing himself with the sign of the precious Cross, he presented himself in the stadium, and said, "O God of Demetrios, help me!" and straightway he engaged Lyaeus in combat and smote him with a mortal blow to the heart, leaving the former boaster lifeless upon the earth. Maximian was sorely grieved over this, and when he learned who was the cause of this defeat, he commanded straightway and Demetrios was pierced with lances while he was yet in the bath-house, As for Nestor, Maximian commanded that he be slain with his own sword.

Apolytikion of Demetrios the Myrrh-streamer in the Third Tone

The world has found in you a great champion in time of peril, as you emerged the victor in routing the barbarians. For as you brought to naught the boasts of Lyaios, imparting courage to Nestor in the stadium, in like manner, holy one, great Martyr Demetrios, invoke Christ God for us, that He may grant us His great mercy.

Kontakion of Demetrios the Myrrh-streamer in the Second Tone

God, who gave you invincible power and with care kept your city invulnerable, royally clothed the Church in purple with the streams of your blood, for you are her strength, O Demetrios.

Apolytikion in the Fourth Tone
Your voice resounded throughout the world that received your word by which, in godly manner, you taught dogma, clarified the nature of beings, and set in order the character of people. Venerable father, Royal Priesthood, intercede to Christ God to grant us great mercy.

Kontakion in the Fourth Tone
For the Church art thou in truth a firm foundation, granting an inviolate lordship unto all mortal men and sealing it with what thou hast taught, O righteous Basil, revealer of heavenly things.

How Often Should We Receive Holy Communion

Why We Cross Ourselves

On the Lighting of Candles

On Prayer and Fasting

The Mountain of Silence: A Search for Orthodox Spirituality
by Kyriacos C. Markides Nov 19, 2002

Encountering the Mystery by Patriarch Bartholomew